A friend of mine was looking out her window a few days ago and trying to figure out which neighbourhood cat was sitting in her yard. She went to a different window and gasped because this is what she saw. 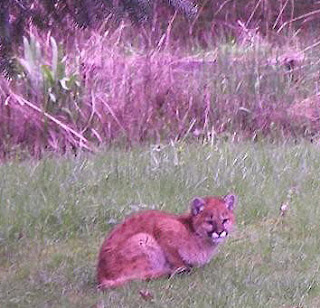 There were two of them and she was hoping she wouldn’t see their mom. The conservation officer confirmed they were cougar cubs though it is unusual to see them this time of year. A different friend used to say that you knew when it was summer around here because the cougar sightings started.
I had to laugh at my own reaction. I was really interested thinking of the cubs in my friend’s yard, but then I wasn’t so curious at the thought they could stray over my way. Is the wire on the cat run strong enough to withstand the slash of a cougar paw? Where is the bear spray? I might want to carry it when I go out to the car.
And speaking of bears, there was a mom and two cubs being relocated not far from here. Won’t be long til the salmon berries are out and then one needs to be careful around the bush areas.

It is a gift, I think, for the wild ones to remind us that the real world is bigger than the artificial human world of schedules, computers and facebook.

One thought on “Big Kitty in the Backyard”